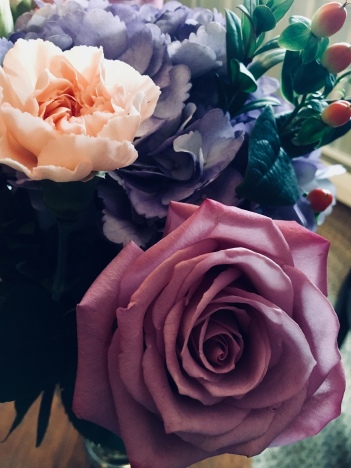 Gratuitous picture of Valentine’s Day flowers, now sitting on my writing desk and allowing me to pretend I am a Fancy Lady Writer. [Close up picture of bouquet with large lavender rose in the foreground.]

Super excited to announce my latest publication!  On February 14, my flash fiction short story “The Fall of Icarus” was included in the inaugural issue of Nightingale and Sparrow Literary Magazine with the theme of “flight.”

A piece of historical fiction (which I’m really beginning to dig writing, by the way), “The Fall of Icarus” gives voice to Meta Fuller Sinclair, the frustrated writer and wife of Upton Sinclair (you know, the guy who wrote The Jungle).  It turns out that Meta was quite an artist herself, but because she was expected to be the mother and helpmeet while Upton went around preaching his radical Utopian ideas, she never was able to realize her potential.  In my story, I suggest that maybe Meta wasn’t so powerless after all.

A historical footnote: Meta and Sinclair ended up divorcing in the most spectacular manner that became THE scandal of 1911.

So please enjoy “The Fall of Icarus” and all the other beautiful work featured in N&S!